This will not be the first time, or the last, that you will hear this from me, but I am a huge proponent for the fact that RA librarians all need to have a better understanding of the history of today's most popular genres.  When it comes to horror I am particularly interested.  I feel that in order to best understand how you are going to help readers with today's horror fiction, you need to understand how the genre has evolved over time.

That is why my new book has a chapter on the history of horror and an annotated list of must read horror classics.

Thankfully, I am not the only one out there tracking down must read horror novels from centuries past.  Back in September, my husband pulled an essay on the forgotten Gothic classic, Wieland by Charles Brockden Brown by Daniel O'Leary from Paste Magazine.

Brown was a Quaker during the early days of America (late 1700s) and, as O'Leary says, he


... is widely regarded as the father of American Gothic fiction, a form that emerged in Europe during the latter half of the 1700s as a dark, generally melodramatic development of late medieval Romance literature. He used genre conventions, but also fashioned significant and unique innovations, repopulating the gloomy Gothic themes with the elements of the relatively young history of America. Many of America’s most beloved authors, including Melville, Hawthorne, Poe, and Fenimore Cooper, considered Brown an important influence.

The essay looks into how this creepy novel is a reflection on the era in which it is written, but the essay also makes a strong argument for the novel's connection to our current American political situation.

There are 3 copies of the book in my library system and it is available as a free ebook from Project Guttenberg, so I will be trying it for myself and will let you all know what I thought.

Read the essay for yourself and see if you want to dive into the haunted past of horror literature.
Posted by Becky at 11:51 AM No comments:

As suggested by Jeff VanderMeer on the Amazon.com Omivoracious blog, here are three titles (2 are collections of stories) to keep you in the Halloween spirit.

I ordered this one for the BPL.
Posted by Becky at 3:13 PM No comments:

Ambrose Bierce Gets His Due 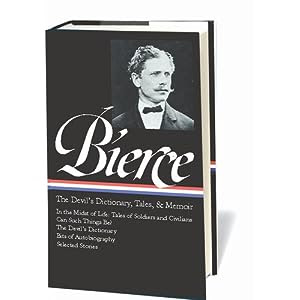 Last weekend the NY Times Book Review ran an essay by Terrence Rafferty entitled Ambrose Bierce: The Man and His Demons.  This essay was an appreciation of the ghost stories Bierce wrote in the 19th Century, but he was also marking the release of the Library of America's new collection of his stories, Ambrose Bierce: The Devil's Dictionary, Tales, and Memoirs.

Bierce is a great writer who has been lost to many modern readers.  I ordered a copy of this new book for the BPL and will be directing a lot of readers to it.
Posted by Becky at 1:18 PM No comments:

Real quick, here are some links I had to pass on before I forgot:

31 Days of Horror Added to Archives

I know I saidI would be taking a break after 31 straight days of posting, but I am a librarian first, and I could not let the 31 Days of Horror feature end without properly cataloging it.  So, you can now find a link to the entire feature and links to each individual post in the Features Archive (right hand gutter).

Also, you can now use this link to listen to my hour on Wisconsin Public Radio yesterday.

And thank you to everyone who has sent me kind words about 31 Days of Horror and my various media appearances.  I appreciate your support.
Posted by Becky at 3:56 PM No comments: