Author to Know-- Jeremy Robert Johnson-- Including a HARDCOVER GIVEAWAY

Today I want to introduce library workers to an author who Bizarro fiction fans have known about for years, but whose work may not be in your library. Well that’s not 100% true. I would venture that those of you who have some Bizarro story collections will have a story or two by Johnson in your library, but a quick WorldCat search showed me that very few public libraries had his books until this one- Entropy in Bloom. From Goodreads:


For more than a decade, Jeremy Robert Johnson has been bubbling under the surface of both literary and genre fiction. His short stories present a brilliantly dark and audaciously weird realm where cosmic nightmares collide with all-too-human characters and apocalypses of all shapes and sizes loom ominously. In “Persistence Hunting,” a lonely distance runner is seduced into a brutal life of crime with an ever-narrowing path for escape. In “When Susurrus Stirs,” an unlucky pacifist must stop a horrifying parasite from turning his body into a sentient hive. Running through all of Johnson’s work is a hallucinatory vision and deeply-felt empathy, earning the author a reputation as one of today’s most daring and thrilling writers.

Featuring the best of his previously independently-published short fiction, as well as an exclusive, never-before-published novella “The Sleep of Judges”—where a father’s fight against the denizens of a drug den becomes a mind-bending suburban nightmare—Entropy in Bloom is a perfect compendium for avid fans and an ideal entry point for adventurous readers seeking the humor, heartbreak, and terror of JRJ’s strange new worlds.

With this major publisher backed, hard cover edition of JRJ’s most popular stories PLUS a brand new novella, this is an author whose time has more than come to be added to public library collections. Many have already added this volume, but not enough in my opinion.

Bizarro fiction is really gaining in popularity because these genres are all about mashing up the speculative genres. The genre even has it’s own award, the Wonderland Book Award, which JRJ has won before. Click here to learn more about Bizarro. Or here for a list of top Bizarro authors which includes JRJ.

To hear a review of this collection by 2 fans, listen to this episode of the Booked podcast. The first half is a review and the second half is an interview with JRJ. [Also, keep the podcast bookmarked because I recorded an interview with them at StokerCon.]

This is a great title to add to your collections and allow Bizarro to have a presence in your library. If you don’t have any Bizarro authors in your library, you are already behind the curve a bit. Fix it by adding JRJ.

Need help booking this volume? Readalike authors who your patrons may already be enjoying are the legendary John Skipp, Paul Tremblay, Stephen Graham Jones, and Nick Cutter-- all authors I have talked about here on the blog more than once, all authors you wouldn’t think twice about adding to your collections.

To help get you excited, I have a brand new, hard cover copy of Entropy in Bloom, from the publisher to give away here on the blog to a public library worker in the US or Canada. Email me at zombiegrl75 [at] gmail [dot] com with with subject heading [Entropy in Bloom] and your library’s name to enter. Entries will be accepted until Wednesday, May 24th at 5pm central. I will reply to you that your entry has been received to confirm.

And if you don't win I would highly suggest finding a way to put a copy of Entropy in Bloom in your collection. I had only heard of JRJ before this collection came out in April. I had not read him before. I am happy to say I fixed that. I have read these stories and they are surprisingly, unsettling, well constructed, and highly original. Even this , “been there done that reader,” was entertained throughout.
Posted by Becky at 9:33 AM No comments: Links to this post

I have added three new reviews to the Horror Review Index and cleaned up a few dead links. I have over 100 reviews of titles that you could suggest to your patrons. No need to read them yourselves, just tell them "Here's what Becky says about this title. " It is not plagiarism. This is why I write the reviews, for you to add the books to your collections and suggest them to readers.

By the way, the link to the Review Index does not include all of the books I have included in my Library Journal columns. Those are annotated for you to use to book talk titles to patrons also. Click here to access them all on my Becky's Original Horror Lists page.

Now for the three newest additions to the Index:

Posted by Becky at 12:11 PM No comments: Links to this post

I love the Shirley Jackson Awards because like their namesake, they don’t give a [BLEEP] about genre. As it explained on their site here: 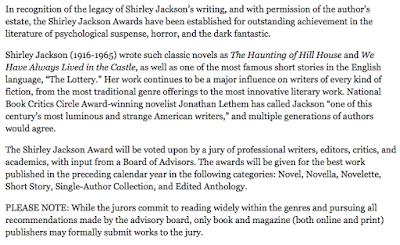 The result of this recognition process each year has been a diverse group of “dark fiction” options.

Click here for the full list of this year’s nominees, but below I have also reprinted just the Novel finalists so you can see my point proven.

By the way, order and suggest all of these titles-- from this year and year’s past. This award always identifies some amazing midlist titles that could get forgotten, and if they did that would be a sad thing for all the readers who would have missed out on experiencing them.

Posted by Becky at 2:55 PM No comments: Links to this post

Happy Halfway to Halloween!!! [Yes, I am still trying to make that a thing]

Over on the main blog, I have this post with a brand new update to my very popular Horror RA presentation.  Click through for all of the details including why you should care, links to the slides, info on how you can watch the webinar, and a handout.

That is the primer though. It is the bare minimum you need as a public library worker to help horror readers. That’s why it is on the general blog.

But you came here, to RA for All’s evil twin to learn more, and that is what I will give you.

Seriously though, this blog is for those wanting to delve further into helping horror readers and developing their horror collections so I have a bit more info here today.

I want to start by highlighting the work of J.T. Glover, a Humanities Research Librarian/Assistant Professor at VCU who looks at dark fiction from an academic perspective. Click here for his blog. Much of his research is very useful to our work in the public library world. I have added him as his own category in my Resources page.

I think this recent post, “Libraried and Under-Libraried Authors” which looks at some of the most acclaimed weird fiction authors and how their titles are represented on North American library shelves, is a great example of how much we can learn from his perspective.

Back in October, I also featured Glover in this post.

My second addition to today’s presentation for all of you brave enough to click over to the horror blog comes from me but it is via my Australian colleague Ellen Forsyth.  While I was at StokerCon last week, I set about on a mission to take selfies with horror authors who I felt libraries should make sure they knew about and, in a perfect world, add to their collections.

Since I was busy with the conference, I was putting them up as fast as I could, but was doing nothing to gather them. Thankfully, Ellen had all of our backs, and she put the entire series together in one Storify. You can click here to see this full visual training tool all in one place. Thank you so much Ellen. [Please also check out Ellen’s amazing work with Read Watch Play for another RA tool].

As you will see, there are authors in this Twitter project who do not appear in my updated horror presentation. That is because there is only so much room on the slides and only so much information people can handle being thrown at them in 50 minutes. But, if you put the presentation and the Twitter selfies together, you have a great example of the authors you should have in a modern horror collection. Again, it is not everything, but it is a great start.

So get to work. You have 6 months to get yourself and your shelves in tip top haunting shape. I have done all the prep work, all you have to do is click and read.
Posted by Becky at 9:07 AM No comments: Links to this post

Thanks to them for getting it out so quickly. We had barely wrapped up the ceremony and my head was still spinning from live tweeting it and then...*poof*.... the Locus link was in my Twitter feed.

Speaking of, if you would rather see the winners as I unveiled it live, click here.
Posted by Becky at 12:50 PM No comments: Links to this post