Continuing the current zombie craze, EW has The Walking Dead on its cover this week.  Of course, I love this show, but I am glad to see others are appreciating it.  Make sure you have enough copies of the Robert Kirkman graphic novel series

(on which the show is based) on your shelves too.
And just in case you haven't been gathering zombie readalikes for the hordes of fans shambling into your library asking for more, Library Journal had this roundup of the best zombie books for adults right now. If you have a sizable zombie readership at your library, I would consider purchasing all of these titles.  We have most of them in the BPL's collection.
Hopefully, this list will keep the zombie apocalypse at bay....for now.
Posted by Becky at 2:53 PM No comments: 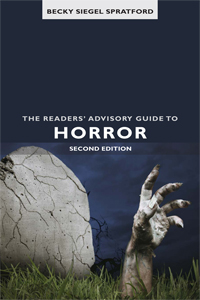 Well, I am just about done writing the new book.  I will be done by Friday and then it is time for edits.  I have to say, I am really happy with it.  This second edition is a complete overhaul.  The feedback I have gotten from actual librarians who have read the drafts is also very good.

While I have been busy writing, the people over at ALA Editions have been busy with the marketing of the book.  The book will appear for pre-order in the Spring-Summer ALA Editions catalog which goes out in February, but they have allowed me to share this sneak peek at the new cover.

As my daughter said, "that is creepy cool."  I agree.  I am also happy to see the silly subtitle has been removed.

So, bear with me on this blog.  There will not be many updates until the book is done, since all of my original thoughts about horror are going into the book.  But I promise it will be worth the wait.
Posted by Becky at 10:29 AM 2 comments:

Email ThisBlogThis!Share to TwitterShare to FacebookShare to Pinterest
Labels: RA for All Horror the Book

has been a solid horror writer for many years now.  He appeals to a wide audience as his stories and novels combine horror, fantasy, and suspense.  The uniting factor in his work is an edgy supernatural presence.  These are not the paranormal tales of Sookie Stackhouse

In honor of the re-release of his classic, Neverland

, Clegg sat down with Dark Scribe Magazine to talk about his life and his work.  He touches on his process, issues of genre, and future work.  Click here to read the full interview.
Posted by Becky at 10:37 AM No comments:

After releasing their overall top 100 last week, Amazon began publishing their genre top 10 lists.  As I was looking through them, I noticed there was not a top horror list.  Okay, I thought, that's fine.  That is, I thought that until I looked at this top 10 list for "Mystery and Thriller:"


This list has 3 horror titles in it: The Passage, Full Dark, No Stars, and Horns!  If 3 of the top 10 "Mystery and Thriller" novels are pure horror books, why not have a horror list, Amazon?
Don't get me wrong, I am VERY happy that 3 horror titles are in this list, but if there are that many great horror books this year, shouldn't they get their own list? Just asking.
Posted by Becky at 4:24 PM 1 comment:

Where Are All The Great New Horror Books

Blogger Michael Ferrante wrote this interesting essay for io9 entitled, "Where Are All the Great New Horror Books."


Of course there is always the Horror Writers Association purveyor of the fine Bram Stoker awards whose winner and nomination list will most definitely provide some fascinating and noteworthy titles. But many titles aren't the type of horror I'm looking for. For example 2009 First Novel winner Damnable by Harry Schwaeble and 2009 Best Novel nominee Patient Zero by Jonathan Maberry look to fall squarely into the "action-horror" blend that, while certainly entertaining, isn't the type of horror I'm really looking for.

He also goes on to talk about the problem of locating true horror at the bookstore due to the fact that it is interfiled with science fiction and fantasy quite often.  He also mentions the curse and blessing of the small presses. (Click here for more on that issue)

While Ferrante has many good points, I disagree with his overall point that there is not a lot to love in horror today.  I have been spending the last 6 months immersed in horror, and I think it is in a much better state than back in 2002 when I was working on the first edition of the book. I think the appeal range of titles has grown, I think the quality has improved, and I think the accessibility has increased.

Much of this argument will be presented in the new book (which is almost done!). But I will give one major example now.  When I wrote the first book, Stephen King

were still ruling the genre, after almost 30 years of dominance.  Now, while those names are still very popular, we have two new kings of horror, who are legitimate best sellers in their own right: Joe Hill

.  Both write a range of types of horror also, not just the action-horror Ferrante refers to in his essay.

I think we are entering a new golden age of horror.  Further evidence: Amazon.com listed The Passage as the number 16 best book of 2010. And that is of all books, fiction, and nonfiction!

Anyway, that is just my two cents added on to Ferrante's.  Go back to the original essay and read the comments he got there too.
Posted by Becky at 2:22 PM 1 comment:


Before Halloween I read the first bound issue of American Vampire


There was much excitement surrounding the release of this book.  First, it is Stephen King's first origin straight to graphic novel story.  But, second, and even more important and exciting, American Vampire marks the solid return of the super evil vampire.


Can you tell I liked it?


Here is the basic plot info.  The story is told in two time periods.  The "present" of the story is 1925 Hollywood and follows a young starlet, Pearl, as she tries to make it big in the movie industry.  The flashback sections of the story happen a generation ago, in the Wild West.


What you need to know before you begin, is that the uniting force between these 2 stories is Skinner, who has become a "new world vampire," and is out to get the "old world vampires" who cannot stand sunlight and seem to control all of the money and power in the American West.


Skinner appears to have no weaknesses. He is vampire through and through, but he can be out in broad daylight.  But over the course of the book we see him learn about his own limitations. He is evil, but has a sense of justice.  As the story goes along, he turns Pearl, and the two are just beginning what I hope will be a long journey of terror and destruction, all in the name of a warped sense of justice.


In terms of appeal, this is a stunning book.  The main color scheme and style is well represented in the cover image above.  The drawings of Pearl and Skinner in full vampire mode are terrifying.  It was disconcerting how much I liked them despite how evil they look. I liked this, but those looking to totally sympathize with Skinner and Pearl may be disappointed.


This is a violent and disturbing book, where people are murdered and decapitated. Innocent people die and there is no truly good hero.  This is a true work of horror.

Interestingly, there is a huge appeal factor in the setting.  Many people like to read anything and everything about the Wild West and/or the Golden Age of Hollywood.  Obviously, some readers may need a word of warning about the violence here, but I book talked this to a reader who was only mildly interested until I mentioned the setting, and then he couldn't wait to start reading it.

Readalikes: If you want to read more horror graphic novels check out the Locke and Key

series by Robert Kirkman, or the Hellboy

For more scary vampires you can also try The Passage


For those who want to try a western, if you haven't read Louis L'Amour

before, go to the library and check out Hondo

.  There is a lot of similarity here.  I have had students read Hondo in the past.  Click here to see what they have had to say.

For those who liked the Golden Age of Hollywood setting and its focus on the underbelly here, try Niagara Falls All Over Again

by Elizabeth McCracken.  Trust me, it might not be horror, but it is a dark look at the entertainment industry.
Posted by Becky at 2:00 PM No comments:

Last week, the Chicago Tribune ran this article about Cemetery Dance, one of a number of excellent small horror publishers.

I keep an index of small horror presses here at RA for All: Horror.  So if you want to know more about these niche publishers, click here.

Also let me know if your favorite is not listed here.
Posted by Becky at 1:15 PM No comments: