Later this morning I will be taping an episode of the podcast Circulating Ideas. Steve Thomas, the host has invited me to talk about what happened in horror in 2012 and to preview 2013.

I have written this post as a companion to the interview.

I am looking forward to a great year for horror in 2013.  Check back here regularly for more horror news, tips, resources, and reviews throughout the year.
Posted by Becky at 9:27 AM 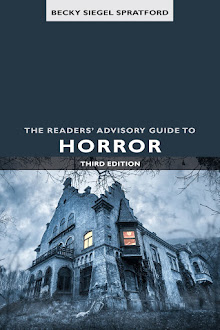 Becky
Becky Spratford [MLIS] is a Readers' Advisor in Illinois specializing in serving patrons ages 13 and up. She trains library staff all over the world on how to match books with readers through the local public library. She runs the critically acclaimed RA training blog RA for All. She is under contract to provide content for EBSCO’s NoveList database and writes reviews for Booklist and a horror review column for Library Journal. Becky is a 21 year locally elected Library Trustee [still serving], a Board member for the Reaching Across Illinois Library System, and on the Executive Board of the Illinois Library Association. Known for her work with horror readers, Becky is the author of The Reader’s Advisory Guide to Horror, Third Edition [ALA Editions, 2021]. She is a proud member of the Horror Writers Association and currently serves as the Association’s Secretary and organizer of their annual Librarians’ Day. You can follow Becky on Twitter @RAforAll.